Pulse of the Nation: 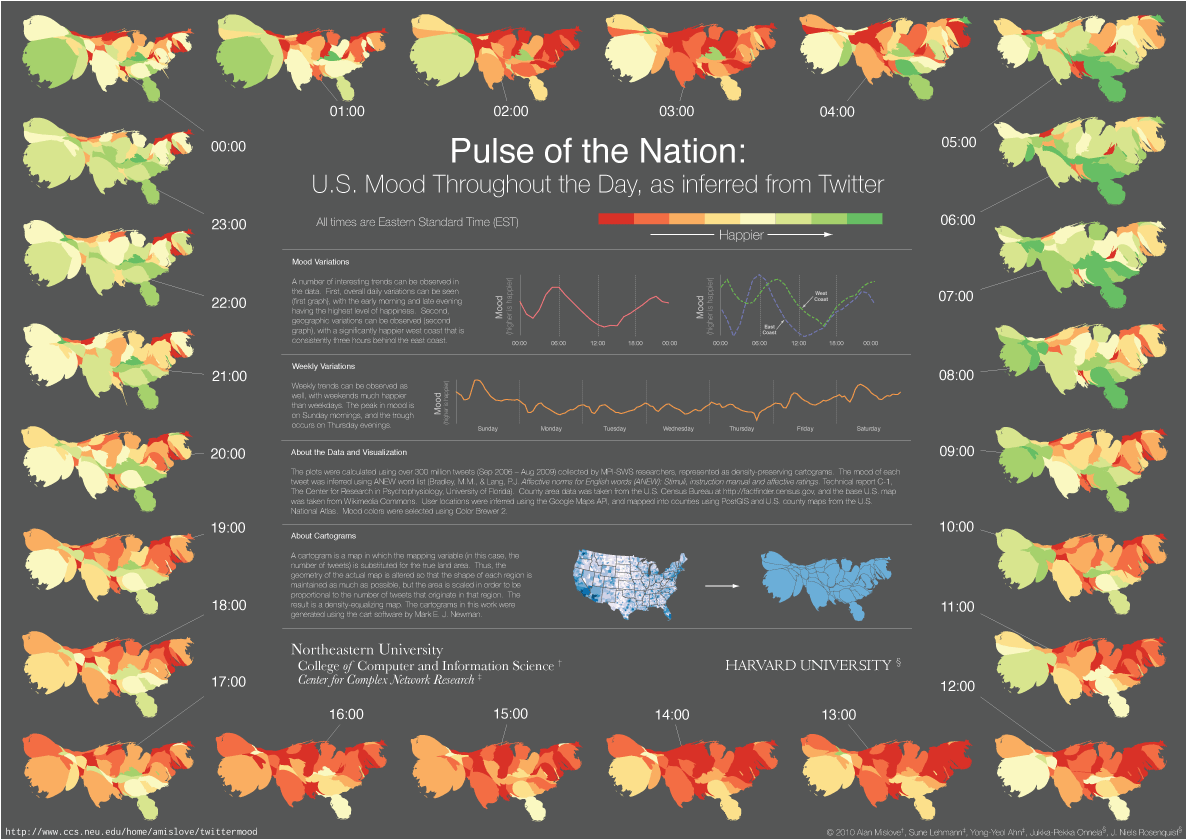 A time-lapse video of the maps, cycled twice, is available below (best viewed at 720p):

A number of interesting trends can be observed in the data. First, overall daily variations can be seen (first graph), with the early morning and late evening having the highest level of happy tweets. Second, geographic variations can be observed (second graph), with the west coast showing happier tweets in a pattern that is consistently three hours behind the east coast.

Similar variations were discovered independently by Michael Macy and Scott Golder, and first reported in the talk "Answers in Search of a Question" at the New Directions in Text Analysis Conference in May 2010.

Weekly trends can be observed as well, with weekends happier than weekdays. The peak in the overall tweet mood score is observed on Sunday mornings, and the trough occurs on Thursday evenings.

About the Data and Visualization

The plots were calculated using over 300 million tweets (Sep 2006 - Aug 2009) collected by MPI-SWS researchers [1], represented as density-preserving cartograms. This visualization includes both weekdays and weekends; in the future, will we create seperate maps for each. The mood of each tweet was inferred using ANEW word list [2] using the same basic methodology as previous work [3]. County area data were taken from the U.S. Census Bureau, and the base U.S. map was taken from Wikimedia Commons. User locations were inferred using the Google Maps API, and mapped into counties using PostGIS and U.S. county maps from the U.S. National Atlas. Mood colors were selected using Color Brewer 2.

A cartogram is a map in which the mapping variable (in this case, the number of tweets) is substituted for the true land area. Thus, the geometry of the actual map is altered so that the shape of each region is maintained as much as possible, but the area is scaled in order to be proportional to the number of tweets that originate in that region. The result is a density-equalizing map. The cartograms in this work were generated using the cart software by Mark E. J. Newman, available at http://www-personal.umich.edu/~mejn/cart.

We are researchers from Northeastern University and Harvard University, studying the characteristics and dynamics of Twitter.

Our project has been covered extensively in the press. Below, we've listed some of the highlights.

Our side of the story:

The most comprehensive list of stories that covered the project can be found here. For more information or media requests, please contact Sune Lehmann.

This research has been supported in part by the National Science Foundation as well as through an Amazon Web Services in Education Research Grant.